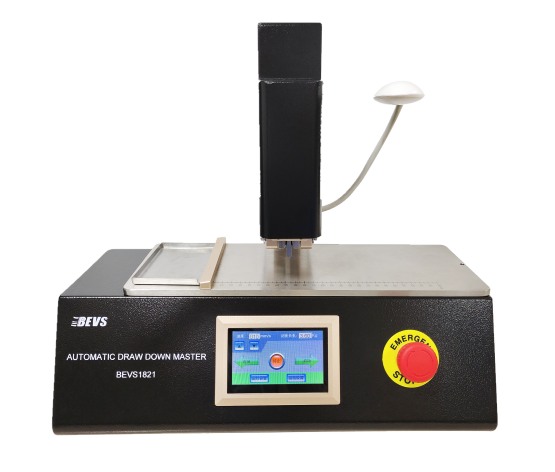 BEVS Industrial had engaged in testing equipment for paint, coating & iInk over a decade, providing the best pre and post sales consultancy services of our testing solutions worldwide. BEVS’s testing equipment are famous by its high quality, stability, and precision, that’s why BEVS gets so much attention from coating market when every time a new product is released. The emphasis of BEVS Intelligent Robotic Testing and Inspection System is new technologies and ideas, such as remote control, sharing, mobile APP control and review. Moreover it deducts the cost and increases effectiveness. Its wide range, comprehensive testing, intelligent and digital design technology bringing a whole new advance experience to our customer, and is constantly improving in our development to revolutionize the instrument industry.

As well, Jackie made an overview of global coating market and analyzed the relationship between coatings industrial and industrie 4.0, showed the global coating market share and the state of coating market in China. He also showed how Industrie 4.0 can improve profitability and highlights the resulting effects on companies, nations and employment. Ms. Huangkai, the president of Guangdong Province Coating Association affirmed BEVS’s performance, she believed BEVS has the ability to let "Made-in-China" tend towards the world!

Participants spoke highly of BEVS commercial integrity, they were all looking forward to further cooperating with BEVS in the coming future!

In order to appreciate all the regular customers and partners, BEVS arranged a return banquet after the Seminar, the shows during the banquet produced a heated and jubilant atmosphere making the banquet permeate with a warm unity and friendship.

BEVS’s products are always popular and acceptance in the world with the quality assurance and innovation, in the future BEVS will continuously focus in quality as well as commitment, and expect you to join our path, believe in BEVS, your trusted partner! Group photo after the seminar